Moving from one chord to another!  Do you have questions about when to use 7th, 9th, 11th, 13th, augmented and diminished chords?  First, visit the Nashville Number System page and get familiar with what I mean by “1-chord”, “4-chord” and “5-chord” then come back here!

As I mentioned elsewhere, I first memorized what chords were used in a particular key.  Then Jeff Newman taught me the simple “Up-5, Down-5” concept.  The picture below shows an example using the dobro.  If you are playing in the key of D (5th fret), the other major chords in that key are found 5 frets above and 5 fret below D.  There, you find the G and A chords respectively.

Here’s a diagram like Jeff drew on his chalkboard.  It shows which passing chords can be used when moving between each of the three major chords in a key.  Yep, you can go straight from the 4-chord to the 5-chord (or vice versa) without using a passing chord. 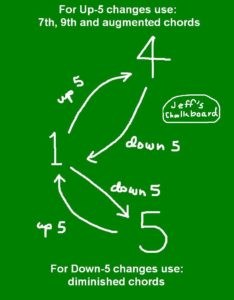